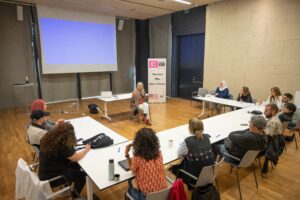 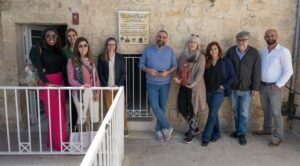 “American Film Showcase gives filmmakers around the world a chance to meet, learn about each other’s cultures, and to share resources and ideas. Even when we don’t speak the same language, we share the same passion for telling compelling stories on screen, exploring the human condition, and for using film to inspire positive social change,” said American film expert, Lisa Leeman. “It’s been exciting to meet so many talented filmmakers here. In discussing our mutual films, cultural barriers can melt, stereotypes recede, and we build cinematic bridges to understand each other’s cultures. I truly believe we can change the world, one film at a time!”

Sawsan Qaoud, Director of the Palestine Cinema club, said, “This program opened new horizons for the Palestinian filmmakers participating in it, as it provided the opportunity to exchange experiences, network and learn about the American film market and funding sources from various institutions and opened the

way for creating new opportunities for cooperation. For Palestine Cinema Club, acquaintance with new cultures through cinema is necessary to reach the world.”

AFS is the premier film diplomacy program of the U.S. State Department. In partnership with U.S. embassies, consulates, diplomatic missions and offices around the world, AFS organizes screenings, workshops, and master classes in more than 60 locations per year. AFS offers global audiences’ insight into American society and culture through film and empowers local filmmakers with tools to tell their own stories. The program is funded by a grant from the U.S. Department of State’s Bureau of Educational and Cultural Affairs and produced by the University of Southern California’s School of Cinematic Arts.